Sol of the Coliseum 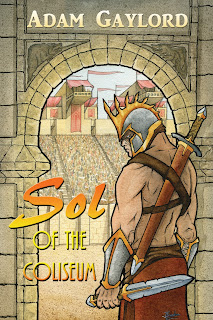 "Sol of the Coliseum" is my gladiatorial fantasy novel published by Mirror World Publishing in March 2015.

Deep in the bowels of the Empire’s Coliseum, the orphan Sol is raised by a makeshift family of guards and fellow slaves to become the most famed gladiator in all the land. With his giant yeti-like fighting partner, Sol must battle cunning warriors and fantastic beasts to delight the crowd and stay alive. But when an oppressed populace transforms Sol into a revolutionary folk hero, the Empire sends its most ruthless assassin to end the insurgence. Sol’s only chance is to do what no slave has ever done: escape from the coliseum and the only home he’s ever known.