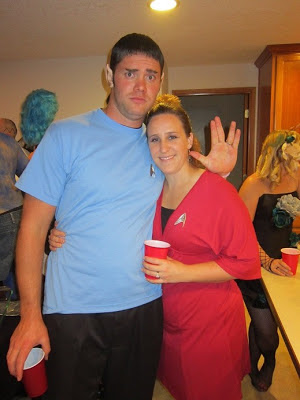 Happy Halloween from Oregon (and Vulcan, of course)!!!
Posted by Adam Gaylord at 9:51 AM 8 comments:

Confessions of a Conference Crasher

Tis the season for professional conferences of all ilks. Last week I presented a poster at the National meeting of The Wildlife Society (TWS) in Portland, OR. Thousands of wildlife professionals, researchers, and students met for 5 days to exchange ideas and network. I had a pretty successful meeting. I talked to some big names and got a few resumes out to prospective employers. Good stuff.

But that wasn't the only conference I attended.

And I crashed it.

Right off the bat, let me say that I feel a little guilty about it. I really try to be a good guy and sneaking into an event, and in doing so taking attention and space from legitimate attendees, does not fall into the "good guy" category. Plus, I'd really like to not get in trouble for this. Just in case you were planning to rat me out.

That having been said, it was awesome.

I had noticed Wordstock when walking around the Oregon Convention Center (which is HUGE). On the opening night of the TWS conference I decided not to attend the plenary session but instead shuffled my way into the middle of a pack of writers and managed to slip by the badge-checkers at the front door of Wordstock.

Once inside I went to every booth, talked to a number of independent publishers, met a couple agents (including the lovely ladies at Loose Leaf Literary who I encourage everyone to check out) and even  managed to listen to a FASCINATING and potentially transformatory panel discussion about voice in memoir writing titled "The Heart of the Matter".

I learned all kinds of stuff.

But the main thing I learned is that writing conferences really are worth it. I've been hesitant to spend the money to attend one of these events. It's hard to lay down a couple hundred dollars if you're uncertain how much you'll get out of something. But interacting with writers, hearing their advice, seeing the options out there, getting that sense of community, even for just an afternoon, it's made me a believer.

I learned that I want to go to another writers conference.

Who knows, this time I might even pay for it.

Just a quick heads up, Tor has the classic 1921 H.P. Lovecraft ghost story "The Terrible Old Man" up for free HERE.

What Are Writers Scared Of?

We're knee deep in the Halloween season and there are spooky and scary writing contests all over the internet. I'm not big on a lot of these contests (it's difficult enough finding time to work on my current writing projects) but I couldn't resist Chuck Wendig's Flash Fiction Challenge over at TerribleMinds. The rules were simple: write a horror story in 3 sentences using 100 words or less.

Man that's a lot harder than it sounds.

After a few gajillion revisions I came up with:

I can feel tears run back across my temples and cool air caressing my naked skin, but I cannot wipe the tears away, cannot cover up.

“The paralytic should be in full effect by now,” he says over the whine of the buzz-saw.

I feel pretty good about it. It may not be particularly original but I think it's pretty scary. When posting it to TerribleMinds, I started perusing the other entries and found myself fascinated by what different folks came up with. Being the super nerdy scientist type that I am, I busted out my Excel spreadsheet and took a tally to see what writers (at least those that like flash fiction challenges) find scary.

NOTE: AS A SCIENCE GEEK I FEEL THE NEED TO...sorry, I'll stop yelling...the need to point out that these "statistics" are super unscientific and relied a great deal on my interpretation of the stories. That being said, please enjoy my nerdyness.

This first graph represents the percentage of stories that had protagonist, antagonist, or neutral view points/main characters. I defined protagonist as "scary stuff happening to them" and protagonist as "the one doing the scary stuff". "Neutral" were those main characters that were simply witnessing something scary and really didn't have anything to do with the story. I was surprised that more writers didn't have the bad guy as the MC (although I didn't either). I just thought more of us would take the opportunity to use that viewpoint.

This graph shows the number of stories that fell within a common premise. Not all of the stories are represented here. These are mostly the ones that fell into a category that I could figure out (same for the rest of the graphs). Being eaten was a big one. Of the 19 in that category, 5 involved cannibalism, 2 of those involving infant cannibalism (parents eating babies to be specific). The "Dying or Dead" category involved stories who's MC was dying or already dead without a clear explanation of why. The "Slasher-like" category is a little broad but includes stories that had a knife/chainsaw/etc. wielding killer. The "Child Accident" category included stories where the child of the MC is hurt or killed, usually due to the neglect of the MC/parent. I found these especially disturbing but not particularly...scary (if that makes sense).

Of the stories that had an identifiable "Bad Guy", the antagonist was overwhelmingly human. I guess us writers are far more scared of people than the supernatural. Of the humans, there were 12 true slashers, 4 evil kids, 3 doctors, and one clown. The rest were just "regular" people. "Monsters" were clearly non-human beasts without any defining characteristics. Of the animals, there were 2 cat, insect, and rodent stories and 1 story each for snakes and dogs. I was surprised that there was not a single alien story.


This one is of themes that turned out to be common in the stories. Most of theme are pretty standard in the horror genre although I did find the number of "Creepy House" stories a little disappointing. Haven't we done that one to death?!?!?

This last graph might just represent me being a jerk. I'm not sure. Basically, these are the people that didn't follow the directions. The "Cheaters" are those stories that tried to cram way more than 3 sentences in by having crazy amounts of semi-colons, commas, and dashes. Cheaters. "Wrong Genre" were those that really didn't have anything to do with horror. These include funny stories that didn't have any scary elements. There were a number of scary stories that were also funny but that's something completely different (and awesome). The "Chuck Love" category included stories who's sole purpose was to brown-nose Mr. Wendig. Have some pride people. The final category included references so obscure that I had to google them in order to have any idea what their story was about. Yikes.

There you have it.

Three Cool Things Just For You

We're at the height of conference season in the wildlife field and I've had no time blog about cool writing...things...and stuff.

As you can tell, my already fragile mental powers are at their breaking point.

Never fear though! I have three cool things for you that I just have to share.

1. Daily Science Fiction - This has been a great find for me. Every day DSF publishes a new, high quality (we're talkin' Hugo award winning) science fiction short story. You can sign up to have them delivered by email, which is sweet. I usually don't have time to keep up with every story so I print the emails to pdf's and throw them on my Kindle. Perfect diversion for "waiting for my wife time". All you husbands out there know what I'm talking about.

Here's a blurb from their site:

Original Science Fiction and Fantasy every weekday. Welcome to Daily Science Fiction, an online magazine of science fiction short stories. We publish "science fiction" in the broad sense of the word: This includes sci-fi, fantasy, slipstream-- whatever you'd likely find in the science fiction section of your local bookstore. Our stories are mostly short short fiction (flash fiction) each Monday through Thursday, hopefully the right length to read on a coffee break, over lunch, or as a bedtime tale. Friday's weekend stories are longer.

2.  Duotrope - I'm probably lagging behind the curve when it comes to discovering this site but holy crap is it ever useful! You can search for markets for any genre of fiction or non-fiction and use their submission tracker to...track your submissions (amazing!). One of the coolest things is that you can view reports on the data they track such as reply times and acceptance rates. Sweet!

3. Drop everything and watch this short film about the Dutch robot wars (I originally found this on io9). This is short story science fiction at its finest!!! (be sure to watch all the way to the end)