Have You Been Saved?

Am I talking about tent revival, dance with venomous snakes, sell all your worldly possessions and tour around the country warning the public about the all-too-soon rapture kind of saved?

I'm talking about Deadliest Catch type of saved. Have you seen this show? It's a Discovery Channel reality series following the lives of Alaskan crab fishermen. I'm pretty anti-reality show but I can't help but like this one. I find it fascinating. I've worked some pretty dangerous jobs (more on that in a minute) but nothing compared to crab fishing. It's some scary shit. Just listen to Wikipedia: 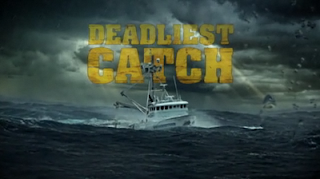 "Commercial fishing has long been considered one of the most dangerous jobs in America. In 2006, the Bureau of Labor Statistics ranked commercial fishing as the job occupation with the highest fatality rate with 141.7 per 100,000, almost 75% higher than the fatality rate of pilots, flight engineers, and loggers, the next most hazardous occupations.However, Alaskan king crab fishing is considered even more dangerous than the average commercial fishing job, due to the conditions of the Bering Sea during the seasons they fish for crab. According to the pilot episode, the death rate during the main crab seasons averages out to nearly one fisherman per week, while the injury rate for crews on most crab boats in the fleet is nearly 100% due to the severe weather conditions (frigid gales, rogue waves, ice formations on and around the boat) and the danger of working with such heavy machinery on a constantly rolling boat deck. Alaskan king crab fishing reported over 300 fatalities per 100,000 as of 2005,with over 80% of those deaths caused by drowning or hypothermia."

As you can imagine, working in such dangerous conditions involves a lot of saving. Guys are constantly pulling one another out of harms way. As dangerous as crab fishing is, it would be a lot worse if fishermen didn't look out for one another.

Which brings me to my saving moment.

Years ago I worked for Quality Beam Corp. in Salmon, ID. For a detailed description of my time at the beam plant, check out one of my oldest blog posts. In short, the work involved gluing boards together to make large wooden beams used in building construction. It's hot, dirty, dangerous work and I worked in the hottest, dirtiest, most dangerous department: the glue room.  That's where we applied glue and used huge metal bolts to squeeze the wood together so that it could dry under the massive heaters that kept the room hovering right around 100 degrees.

My first day on the job I watched a coworker lay open his side with a chainsaw. Shortly before I left I saw a guy get bent backwards over a piece of machinery, breaking his spine and rupturing his spleen. Those kind of major injuries were relatively rare though. Busted fingers was the common injury. Guys were regularly getting fingers smashed between the fast moving and heavy boards. That was just part of the job. A lot scarier was the number of guys that were missing fingers. Some guys would get them torn or cut off by a piece of machinery but the most common way to lose digits was to get them caught between the wood and one of the large metal braces we used to squeeze the glued wood together for drying. Once you hit a bolt with one of the pneumatic wrenches, anything between the brace and the wood would be ground to powder. No chance of reattachment.

We worked 10-hour shifts assembling dozens of beams a day, using the pneumatic wrenches constantly. It was one of those situations where one moment of inattention, one bad decision, could cost you big time. One day we were rushing through an order and I picked up a large metal bracer the wrong way. The guy on the other side of the 7 foot tall stack of lumber couldn't see me. He went to hit the bolt with his pneumatic wrench as I was sliding the bracer onto the bolt, my fingers between the wood and the bracer. One of my coworkers, Jared, saw what was about to happen and kicked the wrench out of the guys hands the same moment he hit the trigger to tighten the bolt. Even in the split second (literal fraction of a one second) the wrench was on the bolt it tightened enough that my hand was squeezed between the wood and the brace. Another fraction of a second and I would have lost all the fingers on my left hand. We backed the bolt off, examine my bruised but functioning hand, I gave Jared a hug (what can I say, I'm a huger), and we got back to work.

Saving is a prevalent theme in many stories. Someone is always saving someone else from physical, emotional, or mental harm. In my manuscript, there are at least 7 life-saving scenes. With something that's so common in fiction, it's easy to become complacent when writing these scenes. They can become shallow, especially in battle heavy genres like Fantasy and Science Fiction. Believe me, there is nothing shallow about being saved. The sense of gratitude that I feel at being able to sit down and type this post with two hands is profound. The sense of gratitude, relief, and obligation your characters feel when they're saved should be profound as well.

Give saving the weight it deserves and your stories will benefit from it.
Posted by Adam Gaylord at 9:20 AM