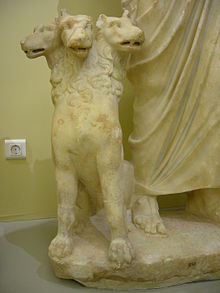 According to ancient Greek mythology a ferocious three-headed dog named Cerberus guarded the gates of the underworld and kept the dead from rejoining the living.


I’ve got issues with that.


Not with the concept; an awesome monster-dog at the gates is much more entertaining than an old bouncer that looks like Santa in a bath robe checking names against the naughty/nice list to see who can get into heaven. Mine is an issue with semantics.


I have a friend who’s expecting (or more accurately his girlfriend is expecting) and he thinks that based on the size of her belly that they will be having twins. Let’s say he’s right and in 7 months she gives birth to two normal healthy twins. Wonderful! As my wife and I have always wanted two kids, I for one have always thought that having twins on the first go would be great; get it all over at once. Plus I could get my tubes tied while she’s giving birth (to save gas).


Now, let’s say that by some crazy chance (1 in about 125,000 births according to Wikipedia) she gives birth to conjoined twins. Don’t freak out, I’m not jinxing my friend’s girlfriend’s pregnancy. I threw salt over my shoulder as I wrote it.
In this unlikely event, two babies would still be the end result, they might just be linked at the hip or back or whatever. My point is that conjoined twins are still two individuals; you would never say that they were one individual with two heads.
So why was Cerberus a three-headed dog? If each head is an individual, wouldn’t it be more accurate to say that he (or she?) was a one-bodied pack of dogs? The same would go for any of the multi-individual single-bodied monsters that riddle mythologies, fairy tales, and B-horror movies.
Regardless of what fiction they reside in, these are fearsome beasts! Let’s give them the respect they deserve and use proper mythological nomenclature when discussing them.
Thanks for reading.
Posted by Adam Gaylord at 5:34 AM